A little more of this and that….

It’s clear, sanded and since that shot, repainted and put back together so I can work. 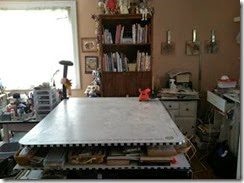 While clearing things, sorting and trying to release some supplies I never use I came across print making supplies. Most of it I gave away but I’m keeping one or two oil based inks and all the water based inks. Of course, my ADD self stopped sorting and had to do some monoprints. These first two became mixed media pieces and I really liked how they came out. They were for a weekend drawing event over at wetcanvas.com 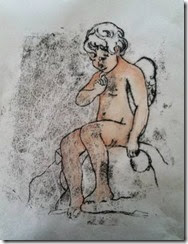 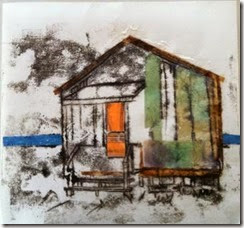 The next one is the house I grew up in, it was bright red so before I gave that red ink away I had to do it. I didn’t take time to find a photo so this is from memory and for printmaking one has to work backwards. By the time I got to the door and windows on the front porch I was on a trip down memory lane and forgot to put them in backwards so on the finished print, they’re backward. It doesn’t bother me enough to change it, I still recognize home. 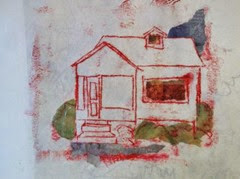 And then it was Tuesday….

On Tuesdays I paint with some friends, outside in when weather permits, inside churches or coffee shops when it doesn’t. Last Tuesday it was wet so we were in Grand Haven Garden House’s Greenhouse. http://www.ghgardenhouse.com/home

It has so many choices for painting or drawing…. This is what I settle on this week 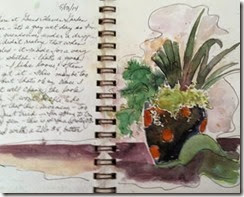 Before I settled on the orange circles on the pot I walked around taking photos for other possibilities; this is one of those shots…. 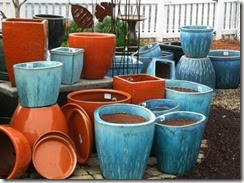 Back home and back into the studio…

A friend wants an ink drawing of their home up north. I’ve done the drawing but after getting back to the monoprints and turning them into mixed media pieces I thought I’d like to try it with their house. This is in process, the collage pieces haven’t been glued yet, still thinking about placement.  Once it’s done I’ll add a watercolor wash to the one she asked for and send them both.

Posted by Helen Percy Lystra at 8:25 AM 2 comments: I’ve been working on the last three 8 x 8 pieces in the mixed media collage series.  This is one of them, still in process.  I’ve had some assistance from another eye which I was happy to have but with mixed emotions.  A good friend, another artist, lost her husband to that dreaded C word.  They are from here and rent in our town in the summer but their home is Florida.

I should say their retirement home is Florida; home is here in our Tri-Cities area.  And because this is home this is where the service was and burial will be.  She needed a place to stay while making all of the arrangements and I was happy to have room to have her here.

Both sad times and good times, sad – no need to explain.  Good – because she and my dear friend Annie Morgan are two of the most creative artists I know so having her here to kick around ideas helped me and gave her a little break from thinking about her loss.

She doesn’t have an internet presence but she’s having an exhibit here this summer at C2C Gallery.  When Cyndi (C2C owner) posts them I’ll put a link here.  Annie has been dealing with some things too so her blog and website are not up to date; however, you can get an idea of what I’m talking about if you go here.

Meanwhile, here are the other two of the three new 8x8 pieces in process 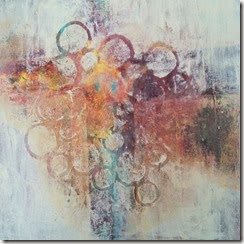 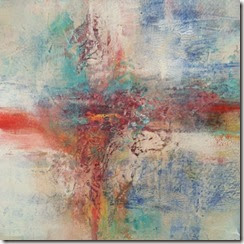 I also fooled around with a transfer, acrylic paint on a piece of plastic transferred to a boring grey collage…. 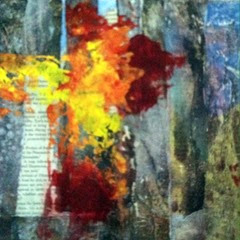 More on that when I get back to it; after I finish the other three.

Posted by Helen Percy Lystra at 12:51 PM No comments: