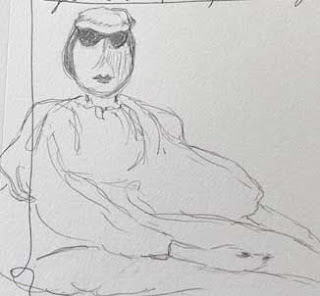 She was a gift from my friend Sally Springfield after we did an Art Doll Collaborative together.  That was my first venture into doll making.


Two artist friends had invited me to join the collaborative.  I immediately said yes because I admired both artists very much and was honored to be invited.  Then reality hit me.  I never even played with dolls let along make one!  But I had committed so I set out to see what I might do.


First I found instructions on how to make a head with a sculpted face – after a few tries – success.  But I couldn’t just send a head  I did arms but found stuffing them made them sort of lumpy so I decided finger weaving would have to work for the legs.  A cassette case covered with fiber fill and jersey became the body so she would be able to sit, yarn and ribbon became her hair and Elzabeth was ready for her journey.  She carried a small sketchbook so each of those who contributed to her finish could do a self portrait and tell about what they added.


Elzabeth traveled to Texas, California, Kentucky and to a few places here in Michigan before returning home to me.  Wish I had a picture of how she looked when she started, certainly not this good but here she is when she got back home. She even got a stand to hold her up while she was traveling. 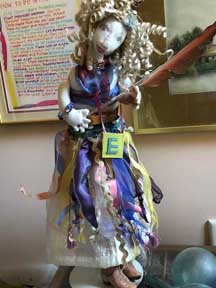 We had so much fun with those dolls that another group started and I did a second collaborative.  This time with Nealie, a mermaid. When she left she had a face, hair and a body.  The rest of her decorative parts were added by the other artists.

And that was the start of an adventure that has continued because it’s fun making dolls every once in awhile. My most recent doll was for a Day of The Dead Exhibit at the Gallery Uptown last November.  Meet Catrina, she lives on a shelf with a Christmas Doll that was a gift from my mother-in-law. 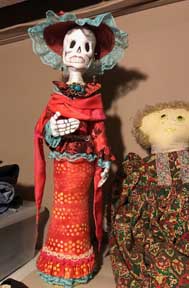 In between I’ve taken a couple classes and even entered a competition.  I won First Place in that competition with Aunt Agnes.  She’s the one in white in the middle. There are some others up there too, experiments or just fun to make. 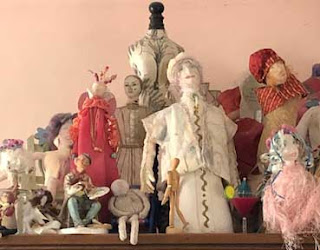 I am a collector – and one of the several things I collect is angels – so why not make a few.  Some of these are from patterns, some my own experiments... 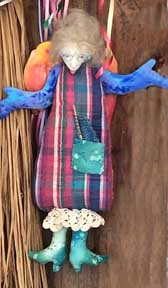 The one with the knitting in her pocket is a Guardian Grannie from a pattern by Marcia Acker-Missall.  I made her for my mother when her health was failing. I have a few others hanging around. This gal with the big feet was a class with Jacque Uetz.  And some using old quilts, you can see the finger woven legs on the one on the right. 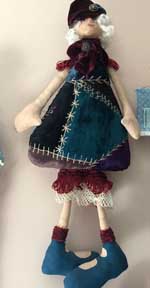 Posted by Helen Percy Lystra at 1:13 PM No comments:

I started writing yesterday but didn't finish.  This morning more memories surfaced as I did my morning quick sketch so I'm starting over.  I'm doing the 100 Day Project and these tags were done for that. 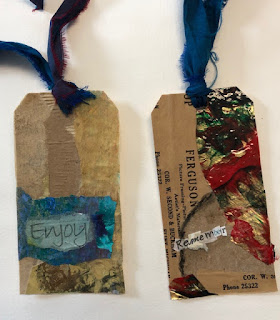 The one on the right is yesterdays and the word remember is because it is a memory of my dad.  Ferguson's did framing. No, my dad was not an artist.  Well, he was but that wasn't how he identified but that's another story.  He was a collector and Ferguson's did a lot of framing for him.

He was an eclectic collector.  The value of the piece didn't matter to him.  If he liked it he bought it.  We have some of those pieces.  Two are worth a few thousand dollars each, one is a calendar print. All three had prominent spots in his home.  All of them were boats.  The calendar print hung over the fireplace.  It was my favorite so he gave it to me when Ed and I bought our home on Lake Avenue. It hung over our fireplace there until we moved,  So where does the red come from if he collected boats?

My parents both loved red.  The house I grew up in was Fire Engine Red.  It was on the shore of Union Lake and Dad always said he painted it red so we could find our way home.  All the other houses were white. Truth was he and Mother liked red.

She told us that before they were married they used to say they would get married when they made red kitchen appliances.  They didn't wait that long but they were together for10 years before they got married.  And while shopping for a new washing machine with my mother many years ago I spied a red oven.  Our kitchen was red so my siblings and I bought it for them as an anniversary present.

The day before I had used some of my sari ribbons on a tag.  It was blue so I decided the rest of that piece would be the finishing touch on the tag that was my memory of him.  He did love boats and the water.

Do you ever wonder why you choose to do some of the things you do?  Right now I'm wondering why I'm so drawn to gardens in watercolor.  Here is another one that I've recently finished and I have another started. 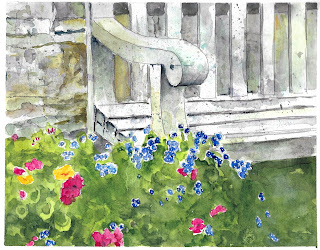 This one includes a few things I like, texture, colorful flowers and something man made.  Many years ago I took a short watercolor workshop from an artist I admired.  My work is nothing like his and I still love his work; however, something he said in that workshop stuck with me and I see it here.  He did gardens and always included some sort of pottery, garden gates or patio furniture.  His reason -- he liked the combination of God made and man made.  I like that too.
Posted by Helen Percy Lystra at 12:35 PM 1 comment: 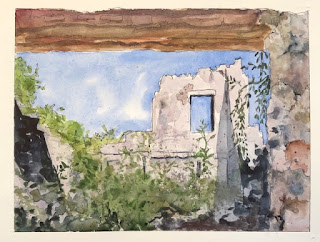 "I am passionately going somewhere, but I'm not sure where" Louise Bourgeois wrote that in her journal.  That's where I am right now.  Another artist, can't remember who, said she has a sign in her studio to remind her to "Stay In Your Lane."  The problem for me is I don't know which lane is mine.  It doesn't bother me though; every lane I travel down is fun … until it isn't anymore.  Then I change lanes.  Sometimes I'll be in two lanes at once. That's the case right now, an old lane that I haven't traveled in for a very long time along with one that is fairly new for me. The watercolor above is that very old lane when I actually used a brush to paint my watercolors.

A few years back I took a workshop on making an art journal.  It was canvas and gesso and very large, only two full pieces of canvas but large pieces.  I didn't like the result so I put it away for awhile thinking maybe if I look at it later I'll like it better. It recently surfaced.  The quarantine has given me time to really get into clutter that is my studio, purging is happening.  There will still be clutter, just not quite as much.

So with the purging things began appearing that I had forgotten about.  That art journal was one.  About the same time my son asked if I had a sewing machine that could handle canvas; his dodger* needed repair and Melanie's machine couldn't handle the thickness.

I have an old Slant-A-Matic that can handle just about anything, new in 1955 and still works just fine so when my newer machines need an overhaul this one comes out.  I figured a good test would be stitching some of those gessoed canvas pages together. So I cut them into 6" x 10" pages, approximately, and stitched two together at a time to make 6 signatures.  Way better to use and easy to stitch.  I will eventually put them all together but for now I like working on the individual signatures. 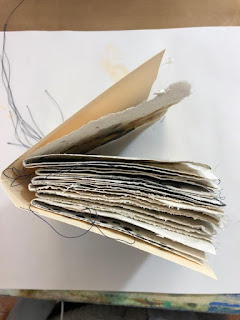 Way better to use and easy to stitch.  I learned that my machine can definitely handle the dodger. I'll eventually put all the signatures together but for now I like working on the individual signatures. here are five of them without having added anything to them yet.  *For those of you who don't know, a dodger is a piece that goes over the hatch opening of a sailboat and it's purpose is to keep spray from going below and from hitting the helmsman in the face, hence,,,, a dodger. 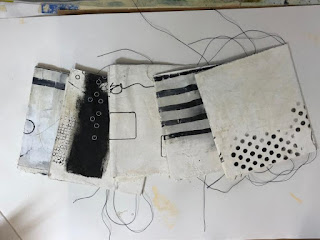 This is one I started work on,  just added some color 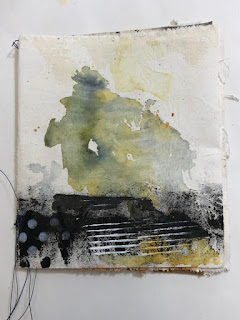 And took this one a bit further.... 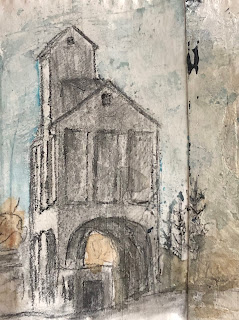 Thinking maybe I'll make this art journal about my town and some of the things that I love seeing here.  That's not a given but it's the direction I'm thinking about.  Which brings me back to Louise Bourgeois and her journal, "I'm passionately going somewhere, but I don't know where."  We shall see where this goes.
Posted by Helen Percy Lystra at 9:02 AM 2 comments: