Something I realized from the Quarantine…. 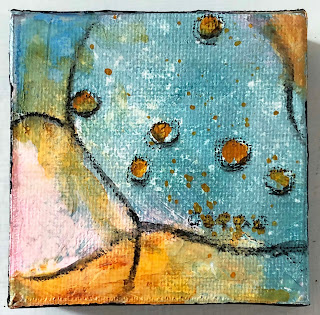 I’ve been training for this my entire life.  I know some of you will find that hard to believe but truth be told, I’m much more comfortable isolated.  It’s how I grew up. I’m happy in my own little world, people know me there. I’ve been told that people who are busy; involved in way too many things, are actually afraid to be alone.  That may be true for some but it isn’t true for me.  I’m involved because it’s a way to force myself to be out with other people


Don’t get me wrong, it isn’t that I don’t like people.  I do. Very much. I have many friends and I cherish those friendships. But … they reached out to me. Had it been left up to me, well I’m just not comfortable reaching out to people. It’s probably got a lot to do with the way I grew up.


I grew up in the country, the oldest of three. I was almost three when my brother was born and just 11 days short of 4 when my sister came along. The two of them were friends from the get-go and friends with all of the other kids that were around that were close to their age.  There weren’t any kids my age, except a couple boys and since I was a tomboy that sort of worked.


My cousin and I were buddies when she moved out from the city.  She was two years older but since our mother’s were sisters and best friends, we were together all the time.  Until she met Dick.  I think she was in the 6th grade when she met and fell in love with him.  True love, she married him immediately after her graduation from Michigan State.


We lived on a lake and that lake was my best friend.  I was either in it or on in summer and on it skating in the winter.  I was also happy sitting on our porch looking out at it, dreaming of adventures or drawing pictures.


It didn’t matter if the pictures were good or not.  I always showed them to Miss Dewey, the visiting art teacher at the two-room schoolhouse I went to for most of my elementary school years.  She liked whatever I did.  I think it was because she knew I liked to do it and she saw a spark of talent.


There were kids my age at that school but they all lived close to the school. I lived 3 miles away and walking that far to play with a friend was out of the question.


In the 6th grade I was moved to the big school, kindergarten to 12th grade. I made new friends there and some lived within walking distance.  I was old enough to walk a bit further. But, still a tomboy, my favorite thing to do during recess was play softball with the boys.

That was an age when the other girls were beginning to get crushes on boys. I wasn’t one of them, I just liked playing softball.  I remember Valentines Day in that class.  For some reason the teacher asked the boys to vote for the Valentine Queen.  Guess who won and it had nothing to do with crushes. That didn’t make me real popular with the girls in that class.  Except a few realized being friends with me got them closer to the boys they had crushes on so I did make a few friends.


The next year my parents moved us to the city for school.  I wrote letters back to the few friends I'd made but none of them wrote back. The new school I went to was just 7th, 8th and 9th grade and was as big as the school I had just come from.  Add to that, moving to a new larger school as the new kid is never easy.  Most of the kids have friends who came with them from elementary school. And, we went back to the lake just about every weekend.

I was in high school before I really made friends there … and even then, they reached out to me.  I’m blessed to have those friends.  The girls, 11 friends from high school who still get together at least once a year.  We’ve lost 2 but found one so we are now 10.

And there is Terry, my best friend. We met when she came into my boss’s office with her mother.  Her mother had to discuss something with my boss, a lawyer. Terry is one of those outgoing people who strikes up conversations with people easily.  She started chatting with me while she waited.  We talked all the while her mother was in the meeting. When the meeting was over and she and her mother left my boss asked how long Terry and I had known each other.  Our friendship was instant and lasting. And as outgoing as she is, she understands me and the fact that I am quite content in my own little world but also willing to get out with others, I can be happy either way.

And right now, I call that a blessing. 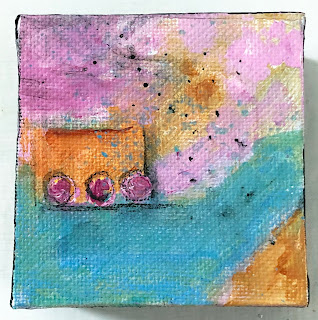 Some In Process and More New Ones

Another post already!  Well, I've been busy.  I have sorted, put away and thrown away all sorts of stuff that has been taking up way more space than it should have.  In addition all that stuff has hidden some works in process. Here are the works in process, the one on the bottom is 16" x 16" so you can tell the other ones are very small.... 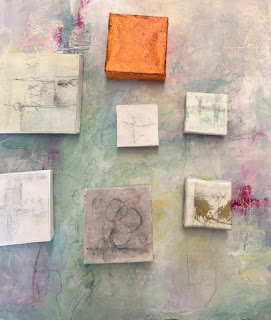 We'll see where how these end up.

I also have some almost done and I have a question.  These are 4" x 4" and all I need to do is decide on the finish for the edges.... black or white?  Any thoughts? 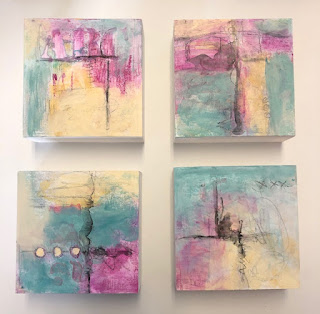 Posted by Helen Percy Lystra at 12:44 PM No comments:

What Goes Around Comes Around

One of my favorite sketch artists is Shari Blaukopf.  Last week she offered a Garden Sketching Workshop.  It was Tuesday, the day I usually paint with my Tuesday Painter friends but it's still too cold to paint outdoors and with the quarantine that's our only option. In warm weather we often paint in gardens so I decided to take the workshop. My sketch is more painting than sketch.... 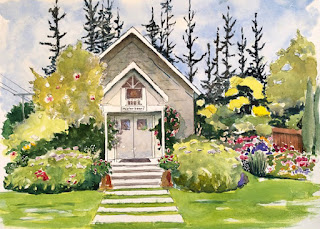 But I learned a few things - mainly that she is much more patient than I am when I'm sketching outdoors.  I ended up working on this all week.  Just so you know, I did other things too, I had to wait for parts of this to dry before moving on.

Looking at it I was reminded of a piece that was in my first one person show back in 79 or 80.  It was a piece that I really liked and it wasn't for sale.  I was thrilled that a person known for her extensive art collection wanted to buy it but I didn't sell it to her.  It was enough for me to know she wanted it.  I did sell a couple other paintings at that show, one a boat and one an abstract.  This is the garden painting I did back then, the glare on the right is from the glass; it hangs in our bedroom. 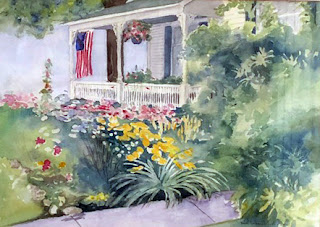 Interestingly, of the three divergent paintings that I sold or came close to selling at that exhibit the only one I continued to paint regularly was boats.  I've recently started playing with abstracts more seriously.  Maybe I should also go back to gardens too.

Posted by Helen Percy Lystra at 9:34 AM No comments:

Going On Month #6 and then there's the 100 Day Project

I started doing these quick morning sketches daily in November, 2019.  This is an early one done last November. 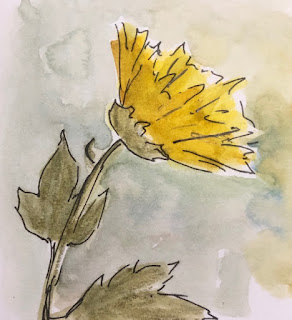 I'm pleased to be able to say I'm still doing them.  The focus has changed.  First it was just anything I saw that day, then it became a morning ritual after my journal writing. 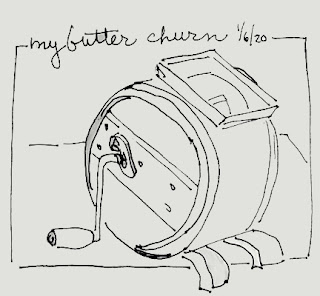 Next it was trying to work fast in preparation for travels with others.  For that I used photos from other trips to work from. 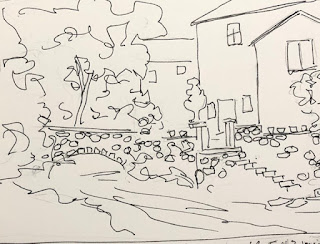 Well, the pandemic took care of the travel for awhile. I still like the idea of working fast though so my current practice is pretty much whatever catches my eye while I'm having my morning coffee. I usually either set a timer for 5 minutes or I start a stop watch to time myself. Sometimes, like this morning, I forget and just start. Today it was yesterday afternoon's teabags, I'd left them drying on the counter. 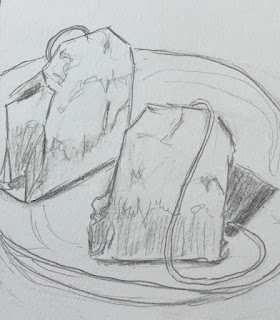 I plan to continue this practice but I'm also planning to add another one.  The #100DayProject is starting next week.  I participate last year doing a daily collage.  The pandemic has meant I have more studio time so more sorting is getting done.  I have lots of small scraps and ephemera that needs to either go into a piece of art or an art journal … or the trash.  I know that I'm going to use it for the project but still haven't zeroed in on how.  I have until Tuesday to decide.
Posted by Helen Percy Lystra at 1:44 PM No comments: