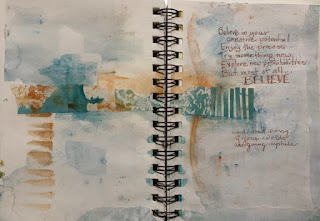 Day 56 and I realized that adding quotes could finish a page and it didn't matter if I liked it or not, just lots of what iffing so whatever happens is okay.  I have notebooks full of nothing but quotes so plenty of material for later spreads..   That one was Tuesday.  On Wednesday I decided to do my morning writing in my new art journal instead of the composition book I usually use.  Then I covered a lot of it up completely and glazed over other parts before finally adding some cheese cloth, thread and the quote.. 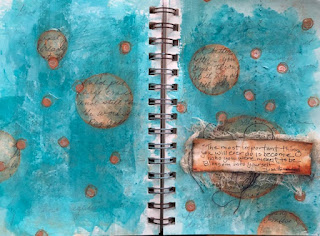 On Day 58 I learned a new word, Meraki.  It's Greek and means putting your soul into whatever you are doing.  I like the word, I also liked this page just as it was... the paint on the page was the result of picking up paint from a palette so it didn't get wasted.  I added the stamp and put the word and definition in and then added the first line of one of my favorite Mary Oliver poems... "One day you finally knew what you had to do and began..." 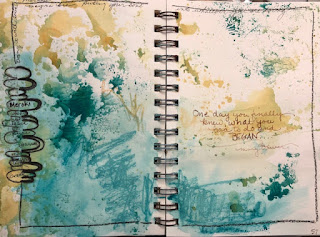 And today's is a mix of collage, paint and words; not a quote, just my thoughts. 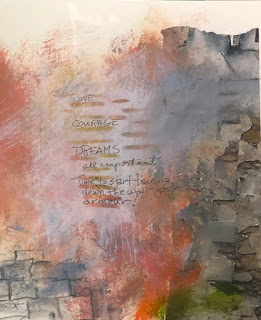 It's only been a few days but I've learned two things so far.... I like doing it even when I don't particularly like the end result and I don't like working with the spiral binding.  I have no idea why the spiral binding doesn't bother me when I'm doing something realistic.  That's what all of my sketchbooks are like... well almost all anyway.  But somehow it bothers me on spreads like these so this last one was just done on one page.  I have others with stitched bindings so I may make a change before moving on.


Posted by Helen Percy Lystra at 7:46 AM No comments: 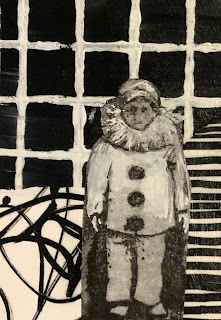 I've passed the 50 day mark and kept up, only missed one day. When I started this I was going to do 50 days of small pieces in different media and then decide which I liked best and continue with that one medium.

Well, I didn't feel satisfied with any of them so I decided to take a different approach.  The rest of the project is going to be experimenting in an Art Journal.  Art Journaling is new for me.  I've always used a sketchbook.  I have boxes of them filled with things I've seen and done through the years but they are all either pencil or ink and watercolor drawings or sketches.  No whatifing and whatifing is what I feel like I need to do in order to find my way to the next level so....

…. here is my first page beginning the rest of the project.  Get it in gear seemed to me to be appropriate for a start... 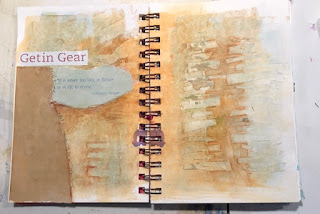 Posted by Helen Percy Lystra at 12:43 PM No comments:

Being Disorderly Has Its Advantages 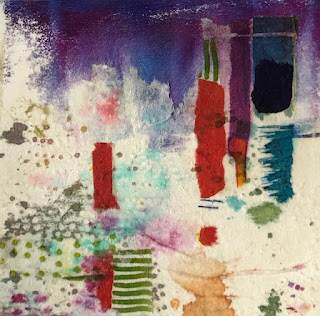 A.A. Milne wrote "One off the advantages of being disorderly is that one is constantly making exciting discoveries."  And I always find something long forgotten but worth finding when I sort through one of the piles in my studio.  A small start on printmaking paper and a lone paper napkin were in one of the piles.  I put them together along with a few other pieces of paper that were sitting on my desk.

Once that was done I started sorting another pile.  I often have to do some sorting to clear space so I can work on some larger projects.  In that pile I found some information about ATC's.  Haven't done any of those in a very long time but thought they just might be fun to work on as part of my 100 Day Challenge.  They are small after all.  And having done a couple 2" x 2" pieces and mounting them so they ended up being 15 x 15 I'm thinking I may do something like that with the ATC's of they turn to be worth doing.  This is my first one.... more to come. 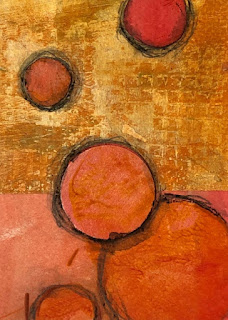 And here are a few more of my most recent pieces that are part of the 100 Day Challenge.... 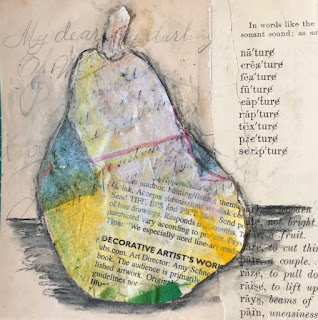 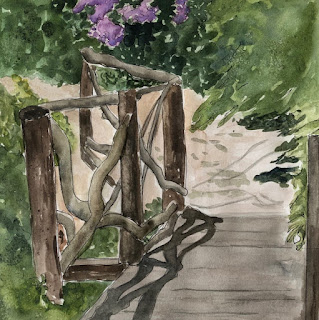 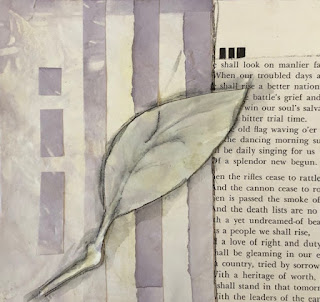 Posted by Helen Percy Lystra at 1:26 PM No comments: