Because it no longer has paint on it. Since I don’t always remember to put on an apron or paint shirt when I work in the studio I often have paint on my cloths. Usually that gets covered up with a stencil design or a small painting – or sometimes several stencils. Recently a cool day at my art retreat in Traverse City got me into the only long sleeve shirt I had with me. It was a good one, I didn’t want to get paint on it so I was very careful – I thought. It wasn’t until later in the evening I saw the back of my right arm in a mirror. A long streak of turquois paint on my good navy-blue shirt. Earlier in the week I was on a hunt for Murphy’s Oil Soap which I use to clean brushes and brayers. I will even work on dried paint. When I showed my shirt to my retreat buddy Terry, she suggested soaking it in Murphy’s. “If it works for dried brushes it may work on your shirt.” Hmmm -- why didn't I think of that. When I got home I tried it. It worked! The shirt is as good as new. I wish I had taken a photo of before and after. All I have is after and what you see is it. Not a speck of turquois paint and it went from the cuff up to the first dark shadow. If you don't clean your brushes with Murphy's you should. It's so easy and keeps brushes usable for a very long time. Here's how I do it – after you’ve wiped as much paint off as you can with a paper towel or any paper (collage material,) put a drop of the soap in your palm and rub the brush into it. I rinse and repeat until no more color comes out. For dried brushes and brayers which I always seem to end up with, soak them in Murphy’s for a day. Then I use paper towel to start getting the paint off. Most of it will come off the brayer easily. For the brushes I lay them down on a paper towel and use a stiff brush to pull the paint out. The only way you can tell my brayers aren't new or at least cleaned after every use is by looking at the handle. 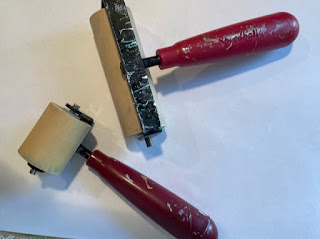 I Still Remember that Sinking Feeling

I’m remembering my first poured painting. I’d seen a demonstration and wanted to try it so I started with a very complex drawing of buoys hanging from a ceiling. Once that was done I started the process of masking and pouring. First masking the lightest color, pouring my watercolor paint, letting it dry, repeat until only the darkest or brightest was left and the final pour was done. Then let it dry again before finally taking all the masking off to reveal the finished piece. Disaster! I had a real mess and was ready to give up on the process. I’m sorry I didn’t photograph it but at the time I didn’t want any memory of my failure. But I didn’t throw the piece away. It was a few days later when I looked at the disaster again and thought – what the heck, it’s already ruined, I can’t make it any worse. I got out watercolor crayons, pastel pencils, colored pencils and oil pastels and went to work on my first mixed media piece. The result – satisfaction 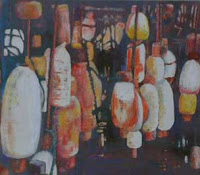 And it sold the first time I showed it. That was several years ago and my introduction to mixed media. I've been playing with it off and on since.
Posted by Helen Percy Lystra at 1:35 PM No comments:

It started when our sons were in junior high.  They’re both in their early 40’s now. The last several years have been at Spider Lake but it began at Oxbow in Saugatuck.

Terry and her family were visiting; they live on the other side of the state.  We were talking about our sons going to camp and I said I never got to go to do that.  Home growing up was on the shore of an inland lake and I had a rowboat and my own speedboat.  My dad was not willing to send me to camp.  “Do you know what they do at camp?  They do what you do every day here at home.”  So Terry suggested “art camp.”

So we took a painting course at Oxbow. While there we took all the meals with our classmate before driving back to Grand Haven to unwind, review the day – and go through several of my art books before a good sleep. My spouse and my son stayed at his parents so our mood wasn’t broken.    By the end of the week we decided that it had been worthwhile but we could probably get just as much out of it if we just took a week without our families and worked on our art.  I had several art books that we could use to guide us as well as the instructor at Oxbow had.

The next summer a friend of Terry’s let us use her cottage on Case’s Island in the middle of Lake Fenton.  An added benefit of that location – we could swim every day in addition to making art uninterrupted.  We could eat when we got hungry.  When we broke for a meal, we either discussed what we had been working on or looked at the art books I brought along.  After a meal and a swim it was back to work.

After two years on Case’s Island her friend sold the cottage.  While at a family gathering I was moaning about losing our spot for a retreat. My brother said he and my sister-in-law just bought a place on Spider Lake near Traverse City that we could use.  With the exception of one year when they were remodeling, we’ve been going there ever since.  Still the same routine – make art, talk, eat, swim.  This year I spent most of my time coffee dying and gelli printing papers for collage. 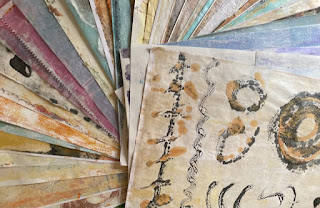 I did a couple warm up exercises but will probably trash them or use them as a base for collage.  The start of two small pieces, part of my “In The Zone” series look promising.  Time to get to work on finishing those.

Posted by Helen Percy Lystra at 9:58 AM No comments: