Which makes me think of Valentine's Day so I have done a few in my collage sketchbook.  It started with one I did for my spouse but I don't know where I put that one. It wasn't in the sketchbook. I will remember before Valentine's Day.... I hope.  If not I'll have to make a card from one of the sketch book collages. 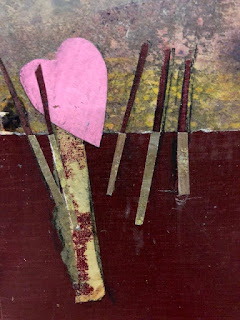 The collage journal and a couple sketches is all I did in the way of art making this month,  I've been concentrating on rearranging my studio.  I'll post the rest of the hearts at the end of this post.  So if you just want to see the art you can skip on down and have a look.


This year instead of a long range goal I am doing weekly goals.  That worked well for this month; I concentrated on a different area of the studio every week except this last week.  I'll get to this last week later.

Several things that I only use maybe once or twice a year got moved to the basement storage area.  Other things moved out completely, some donated, some to friends and some to the trash or recycle center.  There are still some areas that need rearranging but for the most part I have space to work.

This last week aside from the hearts I didn't get much done.  My spouse is still sick, sicker than I've seen him in the almost 50 years I've known him.  And so I have been a nurse and let me tell you, there is a reason I didn't consider nursing when I was in college.  I am not a good nurse!  However, he is not a complainer and he knows nursing isn't my thing so we are coping.  I've also been shoveling snow because he isn't able. That I am pretty capable of doing.  Fortunately our son is a teacher and has been off school so he and our grandson have been over helping with the shoveling

I am hopeful that next week brings fewer snowflakes and a husband that is feeling better so I can get into the studio and get to work on some major art making.  I have to get ready for a show in March.

And here are the rest of the hearts.... 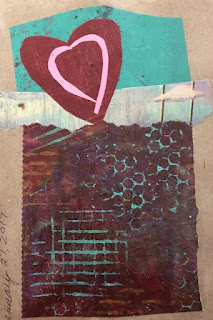 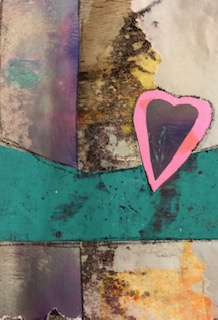 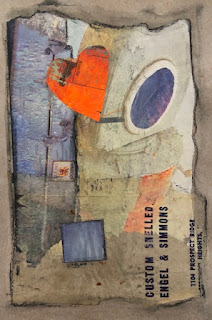 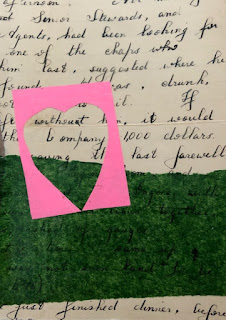 Snow and A Reminder of Home

We have snow.... lots of it.  Facebook posts by some of my friends say "Michigan Is Closed."  Not everything but a lot is closed.  Usually my dear husband does all of our shoveling.  He has a huge snow blower that does a magnificent job.  Unfortunately it is too large for me to use and he has been sick since Friday.  It has been snowing every day since Fridays so the shovel has gotten a workout..

Last night I was pretty tired from all that shoveling.  However, before going to bed I had to do one quick sketch from a photo that had been posted on the Weekend Drawing Event over on wetcanvas.com.  The photo was posted by a friend, a view from her front yard in Oklahoma.  It could have been the front yard of the house I grew up in …. had to at least get a quick sketch done...  The only thing different is the foliage in the foreground.  Otherwise that's the little bay our home was on looking out at the big bay the other side of the peninsula.  There was a log cabin on the end of that peninsula.... should have put that in my sketch, 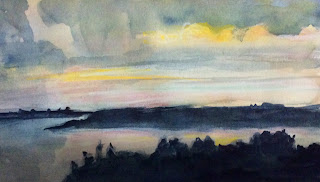 Today was the worst but I live in a great neighborhood... neighbors pitched in and did the worst of it. Now I'm ready for the next blast which they say is coming tonight.
Posted by Helen Percy Lystra at 1:24 PM 2 comments:

Some Art and Other Thoughts

First some sketches... I always have a sketchbook with me and on Sunday I worked at the Gallery Uptown here in Grand Haven.  It was a cold day so not too many people downtown; I had time to do a couple sketches from weekend drawing event images over on wetcanvas.com. 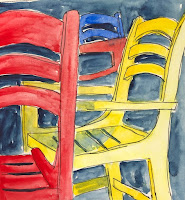 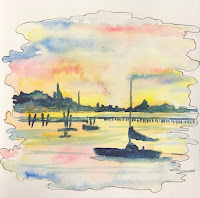 And I did a couple more in my Collage Journal 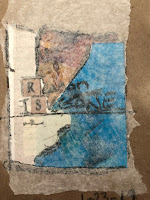 January is always a time for me to reflect on life... where I've been and where I'm going.  I'm not a planner.  I don't always know where I want to go so the planning is usually pie in the sky.  To be honest sometimes life just takes me along without my realizing where it's taking me.  So far it's been a pretty good ride; however, as I am looking at the shorter end of my life I think perhaps it's time to think about what I where I want to go with the rest of it.

I did do something very different this year... a weekly goal.  And so far it's been working.  Four weeks almost gone, three goals accomplished, this weeks almost done.  The goal for the month has been get that studio organized so you can spend the rest of the year making art.

One of the blogs I read is Laura Lein-Svencner.  She posted some thoughts I thought where worth thinking about as I begin to think about the direction my art is going to go...
One of those I don't need to think about... I don't need to learn to love the process.  That one I've got covered; my problem is I love too many processes.  Another is the first one... I know it's something I have to do but should it be more... I don't know.

And a thought that I think fits art.  I have often said putting ones art out there is like standing in the middle of a party nude. 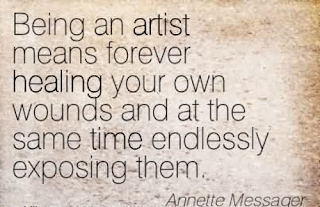 This past weeks news also gave me much to think about and do I want to say something about it with my art?  Maybe just in my sketchbook for me alone.

The fact that so many adults jumped on a story without checking the facts just because it fit the narrative they wanted bothered me, a lot.  And then, when the whole story came out these same adults claimed it was still the kids fault for wearing a MAGA hat because they claim a MAGA hat is the same as White Hood worn by the KKK.  I'm sorry.... NO!  Just because 10% of the 63 million who voted for Trump may be racist (and I say may be because that is a matter of interpretation) doesn't mean anyone who wears a red hat is racist.

I think I need to buy a MAGA hat.


Posted by Helen Percy Lystra at 8:26 AM No comments:

Last night our downtown hosted the 10th Annual Wine About Winter here in Grand Haven.  The event is a combination Art Competition and Wine Tasting.    Stores feature artists and nibbles; some also have wine, it's a fun event.  There was a good crowd, good art and some good wines to taste.  and I was honored to be one of the Honorable Mention Winners with this mixed media collage. 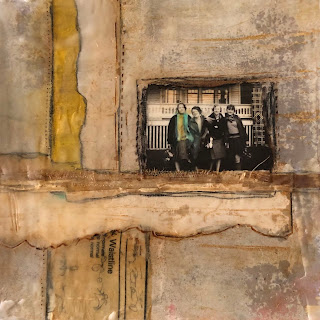 I have continued to work on my weekly goals and it is beginning to show in the studio, I actually have more space to work. There is still a long way to go but it will get done.  With more room there was space to do more papers coated with polymer for tack down collage.

And I have a few more done in my collage sketchbook.  Some I like, some not so much.  However, this is a learning tool so I am not obsessing over the ones I don't like, just moving on to the next one. 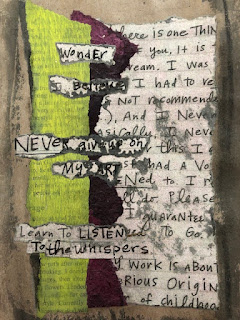 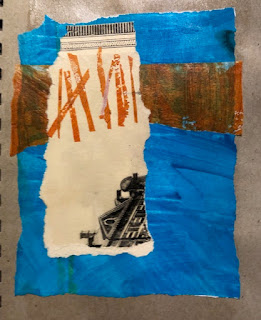 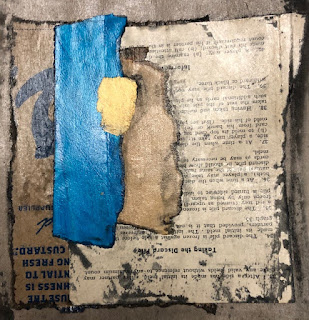 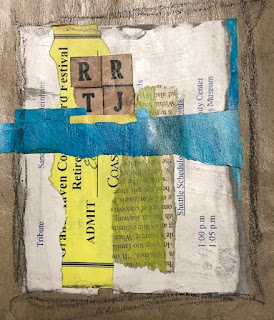 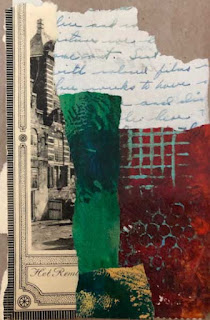 Posted by Helen Percy Lystra at 11:11 AM No comments:

A Few More In My Collage Journal 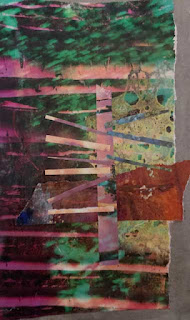 The last day of last year, trying something new.  I wrote about it a few posts back and did some regularly but then got involved in finishing some other non-art related projects.  Now I'm back to making some sort of art every day.


Posted by Helen Percy Lystra at 11:14 AM No comments: 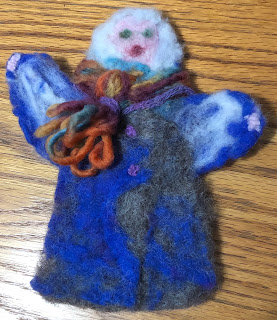 This year instead of major goals I'm making small weekly goals.  This week it's clear out the clutter in front of the pie-safe in my studio and reorganize.  Among the things I found, some long forgotten felting needles and the remains of a pair of felt slippers.

The slippers reminded me of a fun day when my friend Betty Kammeraad Dobie was teaching us to make felt slippers... we were lousy students but we laughed a lot... a whole lot!  Synchronicity, one of the friends who was with us that day is heading to California for a month or so.  She is dealing with macular degeneration and the early stages of alzhiemer's so is afraid her sons are moving her permanently.  That isn't the plan but she knows more about her condition than they do which causes her to worry.

Since I found the mangled slipper and the needles I decided to make her a doll out of the felt.  The scarf is some scrap yarn but the rest is from the slippers.. That's my art sketch for today. I think she'll remember the time we did the slippers but I'll have to remind her that the last time she saw the felt it was an oversize slipper.

And the rearranging of the pie-safe is coming along.  That project should be done by the end of the week. My next door neighbor sells wool for felting along with felting supplies.  Now that the doll is done the needles are going there.  Felting is not one of the things I plan to do in 2019, it's one of the things I had to try.... several years back.... and the materials just resurfaced.  Time to go.
Posted by Helen Percy Lystra at 2:28 PM 1 comment: