Art Tribe – an inspiring and supportive group of artists. The new exhibit in the Gallery Uptown's Walburg Gallery features work by one such tribe. One of its members is a world traveler. When she recently shared a boatload of travel photos with the tribe, the concept of this show came to be. Each of us selected photos that inspired at least one of their works in the show.

These are two that I picked. 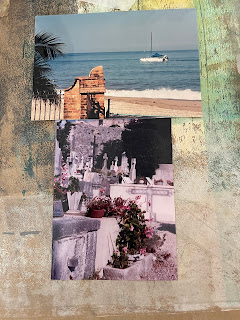 The two images inspired paintings that don't look anything like what I was seeing. But that happens often.  There often is a circuitous route to the end result.  The piece below, The Lord Potted Clay & Put Words on it. Sumerian epic poem c1800 BCE  was inspired by the bottom photo above. 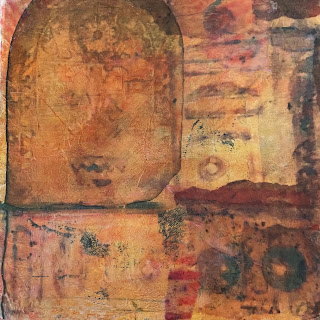 and this one, Sarciphagi  was inspired by the top photo. 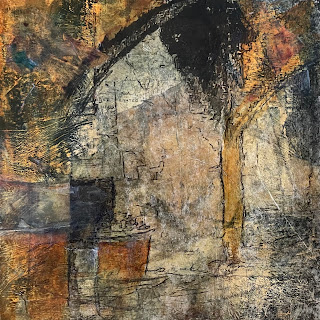 So how did the two top photos lead me to the two totally different paintings?  It certainly wasn't what I had in mind when I picked them.  I love old walls and old cemeteries.  I also love water and arches which the curve of the brick reminded me of.

As I began to scribble on the supports I was using I remembered a trip to San Antonio when we visited some of the missions.  Who knows why, it just did. I went digging for some of my photos.  Those I found brought me back to the photo on the top, the arch of the wall and the colors.  Recently I’ve also been studying some ancient marks and symbols that seem to be universal.  Going through my San Antonio photos I found several that included some of those universal marks so I included them in both of the pieces; however, more of them are visible in The Lord Potted... than in Sarciphagi.

Posted by Helen Percy Lystra at 9:50 AM