Goals: working on some, still setting some

One of the advantages of being disorderly is that

one is constantly making exciting discoveries.

One of the discoveries I made while looking for something else is one of my collage sketchbooks.  It's one I hadn't used it since February of 2019 and there were still several pages to fill.  So yesterday I decided to add a challenge, a rather simple one since it's a short one, a collage a day for the rest of this month.  That's not to say I won't continue but I like the idea of 30 day challenges or goals. 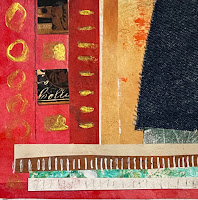 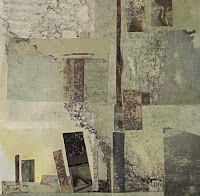 I have some major goals for the year.  One is ongoing -- become a better artist.  That entails more painting and more collage.  In that vain I've joined two organizations -- the National Collage Society and the International Society of Experimental Artists.  Both offer workshops and sharing of ideas.

And my word for the year is FOCUS.  That applies in so many ways and seems to make everything else clearer.  Focus and becoming a better painter brings me to another practice that I've started.  There is no end time for this one, for now it's simply a layer a day because I want one layer to dry before adding another.  I'm experimenting with color; seeing how they react with layering as well as trying some color combinations or colors that I rarely use.  Here are some the first couple weeks.

The colors that were new for me in these two, Manganese Blue and Green Gold. I've used a scraper to apply the paint in these which is a way of applying paint that I don't normally do.

And I still work in my art journal and my grunge journal but those aren't daily.  I may decide that one of those becomes a daily for one month sometime during the year but for now they are every now and then.  Here are the latest entries in those.  Some from December and some this year.  I don't finish these all in one sitting... they are works in process. 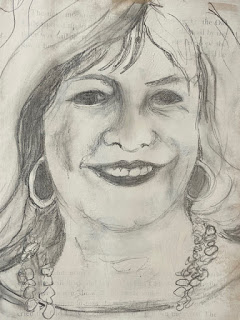 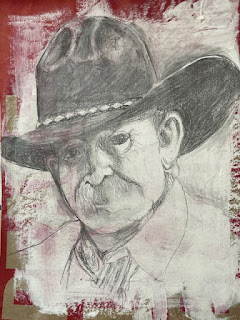 And one last goal -- post something here every week.